This is far from a fluky result. Note the PED rankings of the national champions since 2000.

Pass Efficiency: The Key To Victory

Pass efficiency is an enigmatic formula that tries to combine various statistical measures into a meaningful whole. The formula is:

On average, completion percentage and yards per attempt account for 93% of the total pass efficiency measure.  If teams can maximize these aspects of their passing game, they will win a very high percentage of the time.  For example, since 2001, BYU is 51-2 in games where they completed at least 62% of their passes and averaged at least 7.4 yards per attempt, as shown below: 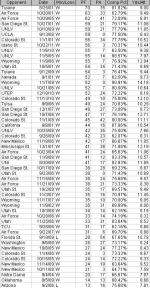