BYU’s Gotta Get the Ball Downfield

Ty Detmer set all kinds of school and NCAA records during his time at BYU from 1988 to 1991.  A couple of those records stand in stark contrast to the output of the BYU offense since he took over as offensive coordinator in 2016:

Fast forward to 2016 and early 2017 and BYU is nowhere near those record numbers:

But the problem isn’t that the current BYU offense isn’t threatening its own per attempt and per completion record numbers, it’s that they are well below what they need in order for BYU to consistently score points.  It’s because yards per completion and points per game are two stats joined at the hip. 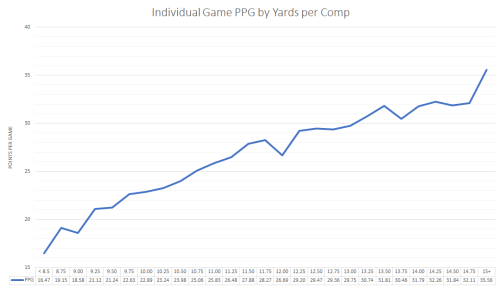 Over the last two seasons for BYU:

In the last two games, BYU has completed 54% of their passes and averaged just over 8 yards a completion.  Looking at the grid above, that translates to a win probability of 17%.

BYU has to figure out how to get the ball downfield more.  That doesn’t mean they need to bombs away, but they have to throw past the sticks more often than they have to this point.  The low yards per completion in 2016 is a big reason why 8 of BYU’s 13 games were decided by a TD or less and it’s an even bigger reason why BYU is 1-2 to start the 2017 season.

Hail Marys – Just How Improbable Are They?

Before digging into this question, let’s celebrate this play just a little bit more:

Intuitively, we all know that a play like this is incredibly rare.  First, because these game situations don’t happen every game and second, because the play usually doesn’t work.  But can we put some hard numbers around that obvious observation?  Here’s an attempt to do so.

I was unable to find on the internet anywhere any real work done on Hail Mary probabilities.  Since there is no standard definition provided by earlier analyses, I’m going to set up the criteria as best I can to put the Mangum Miracle in its proper context.

A Hail Mary is most commonly defined as a long pass into the end zone into the middle of a huge group of receivers and defenders.  For the purposes of this blog, it’s going to have to be a little different.  Play by play text doesn’t provide the details of where the ball was thrown and how many people were trying to catch it or bat it down or intercept it.  Hail Mary passes can also occur in the 1st half or 2nd half and don’t always necessarily happen on the last play of the half or game.

In an attempt to make this as apples-to-apples with the Mangum Miracle, this analysis will identify a Hail Mary situation as follows:

The statistics used in this analysis come from play-by-play data covering 7,220 games from the 2005 to 2013 seasons.

Scrambles on plays that meet the above criteria are ignored.  Given that, 403 games out of 7,220 (5.5%) have pass attempts which fits the criteria.  Broken down by distance from the end zone, they are

So most of the attempts (56%) come from a distance (60 to 99 yards) that is too far for most QBs to throw into the end zone.  Mangum’s attempt from the Nebraska 42 is closer than 344 of the 403 (85%) attempts.  In fact, the longest Hail Mary TD during this span was a 53 yarder by Arkansas State vs Memphis in 2006, so most of these 403 attempts were doomed to fail simply because they were too far away to work.

Of the 403 Hail Mary situations from 2005 through 2013, only 10 (2.5%) resulted in TDs.  Seven other receptions were stopped inside the 10 yard line.  However as mentioned above, the majority of these attempts came from too far away to have any realistic chance of working, so here is a breakdown of success rates by distance.

A Hail Mary pass was intercepted on 19% of all attempts, which is nearly 8 times more frequent than a Hail Mary touchdown.

It is freely acknowledged this analysis is limited by the limited detail in the data available, but hopefully this post sheds at least some light on how unlikely an occurrence this win over Nebraska really was.

The season opener versus was Taysom Hill’s best passing game as a starter in several respects:

Hill “only” had 97 yards rushing vs UConn.  This snapped his 3 game streak of running over 100 yards, dating back to the Notre Dame game. Other Hill rushing notes:

Other odds and ends:

Due to unpopular demand, there will be no BYU vs Utah statistical extract post.  Optometrists and Gastroenterologists everywhere rejoice!   In the near future there will be a lengthier examination of Pass Efficiency and why it is absolutely vital that BYU improves significantly from their last place ranking in this category.

The surprisingly dominant victory over 15th ranked Texas provides for a lot of great little statistical tidbits this week: 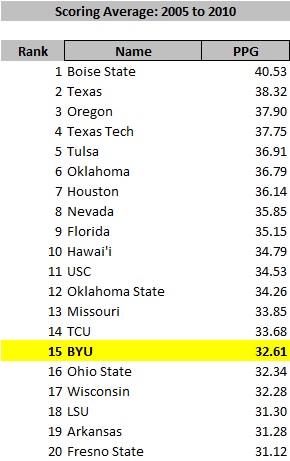 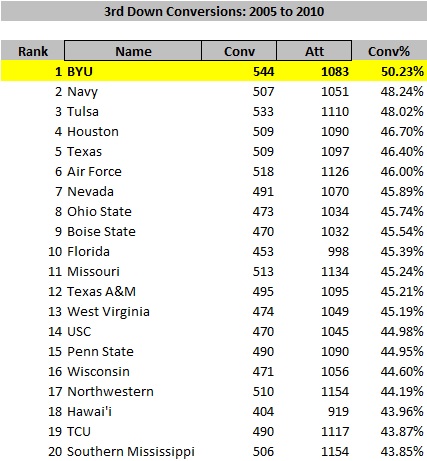 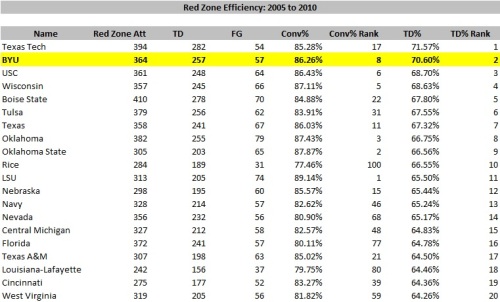 Do BYU QBs Have Favorite Receivers?

BYU has seen its share of changes at quarterback over the past 3 seasons, with 4 different QBs getting at least 1 start during that span. A question that is often raised is just how much does a change at QB affect the distribution of passes to the receivers? In other words, do different QBs have different “favorites” they like to throw the ball?

Below is a heat map showing how often receivers were targeted (i.e. were recorded as the intended receiver, regardless if the pass was actually completed) by different BYU QBs over the past 2 seasons. The heat map shows that there were definitely some receivers that benefited/suffered by the change in who was throwing the ball to them. 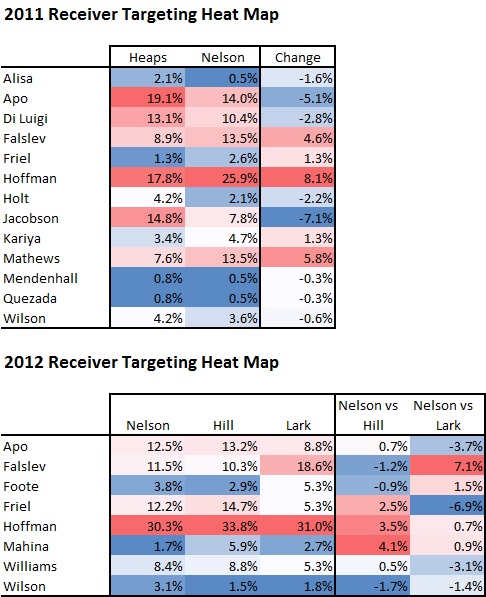 Conventional wisdom was that in 2011, Jake Heaps favored Apo more than Hoffman and it was vice versa when Riley Nelson took over as the starter. It turns out in this case that conventional wisdom was actually correct. Heaps threw to Apo 19.1% and Hoffman 17.8% of the time, but Nelson only looked to Apo 14.0% and Hoffman 25.9% of the time. That’s a pretty pronounced swing in receiver preference.

Something that appears to have gone largely unnoticed is that McKay Jacobson suffered even more by Nelson’s playing time, having his targeting percentage cut nearly in half, from 14.8% to 7.8%.

In 2012, the distribution of the ball was a little more consistent between QBs. The biggest differences were that JD Falslev was targeted much more frequently (7.1% increase) and Kaneakua Friel much less (6.9% decrease) by James Lark, compared to Riley Nelson.

All 3 QBs in 2012 relied equally heavily on Cody Hoffman, targeting him between 30.3% and 33.8% of the time. With most of the receivers from 2012 returning in 2013, it will be interesting to see if the ball distribution will be a little more even than it was last year.

This blog post from a couple of weeks ago discussed whether or not BYU should expect to have to play an additional 15 to 20 plays per game on defense compared to 2012, due to the Cougars going with a very uptempo offensive scheme in 2013.  The post’s conclusion was that based on historical data of other uptempo teams, that the number of additional defensive plays these teams faced was considerably less than Bronco’s estimate of 15 to 20 per game.

A question that arose while analyzing this topic was whether or not facing an uptempo team would affect the opponent’s own offensive tempo. Would their offensive pace increase because they get sucked into a track meet, or perhaps their tempo would slow down in an attempt to counterbalance the hyper-speed approach they were up against? The answer appears to be neither.

The bar chart shows a classic “bell curve” shape where the average time per play is almost exactly the same against uptempo teams as it is against the rest of their schedule. This is based on 270 games involving all teams between 2005 and 2012 which averaged over 80 plays per game for an entire season.

Another way of looking at it is the average seconds per play:

So the average result of normal tempo teams playing against uptempo teams is that their tempo speeds up by 0.25 seconds per play, or a mere increase of 1%. Also worth noting is that normal tempo teams have a tempo that is 18.4% slower than their uptempo counterparts.

How Much Does Field Position Matter?

Last week, starting cornerback Jordan Johnson tore his ACL while practicing kickoff returns. Bronco Mendenhall explained that he had Johnson returning kicks because of a study that showed how much impact winning the field position battle had on wins and losses. Unfortunately, Bronco neglected to share any of the specifics of that study with the media. Well, in order to fill that information vacuum, Cougarstats has done its own research.

Of 6,372 games played between 2005 and 2012, the team that won the field position battle (i.e. their average starting field position for each drive) won 71.9% of the time. Even if the battle was won by less than 5 yards, the odds of winning are 57% and the win percentage increases fairly rapidly with additional yardage. 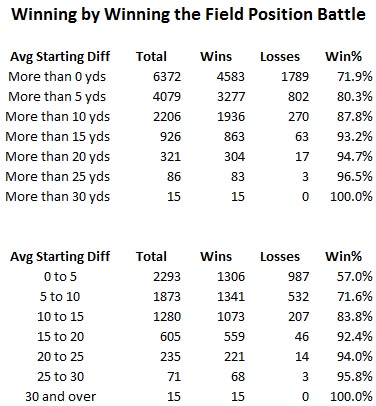 Of course, starting field position is due to a large number of factors of which punt and kickoff returns are only a part. Drives begin after a kickoff 41.0% and after a punt 37.7% of the time, for a combined 78.7%. However, many kicks and punts are not returned. Drives beginning after a kickoff RETURN or a punt RETURN happens only 39.0% of the time, so even if you increase your kick return average 5 yards, it will improve your average starting field position by about 2 yards.

So was the reward worth the risk of injuring one of the more irreplaceable players on the BYU defense? You be the judge.